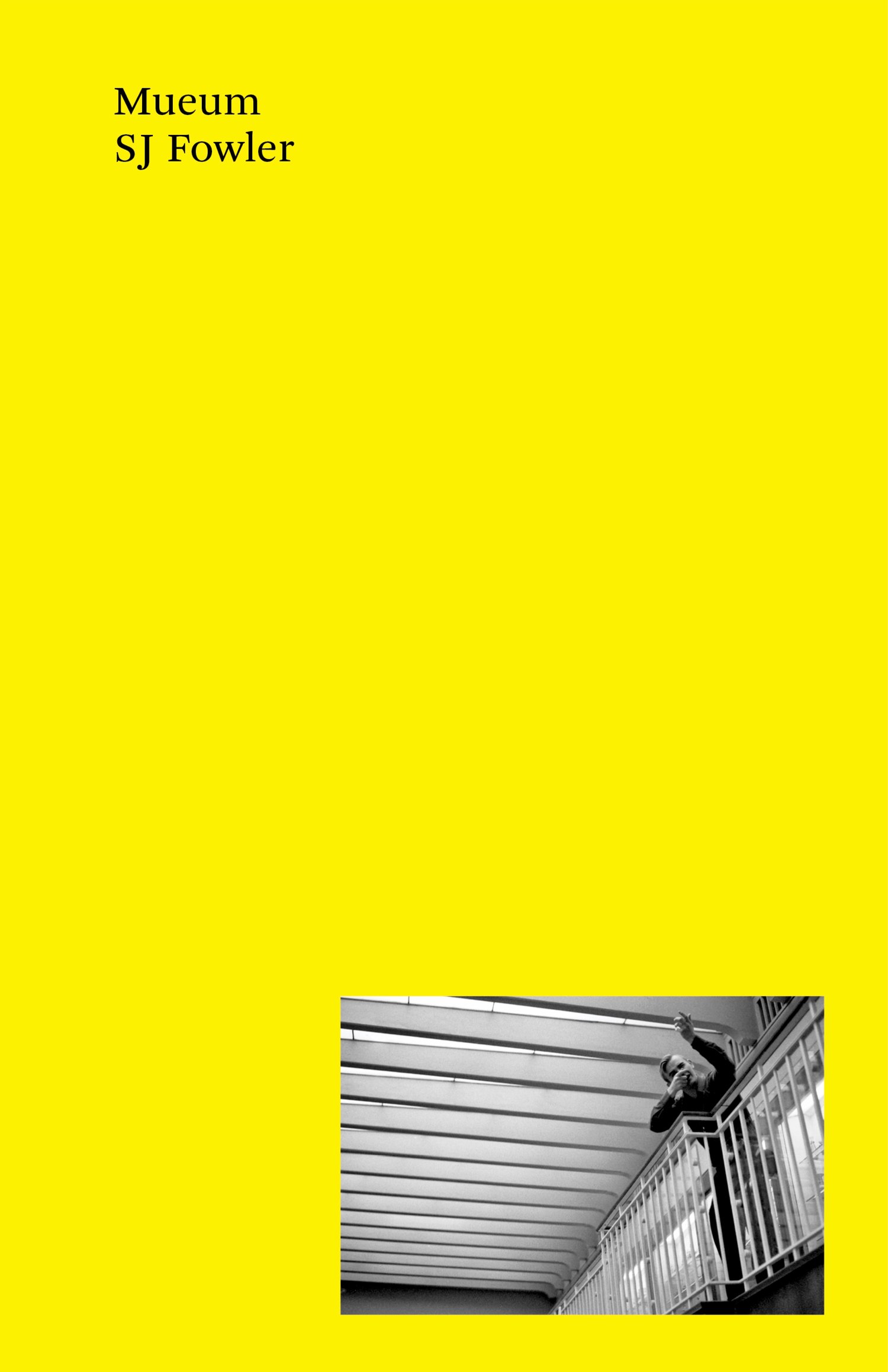 A showcase, ransacked with horrid delight: Fowler's MUEUM
presents the placid, lurid violences of surveillance and exhibition
with startling and brutal stylishness. A seething triumph.

A book as powerful, monumental and strange as
Alasdair Gray's Lanark in miniature.

SJ Fowler is arguably the most influential, tirelessly generative and expansively generous English artist working in experimental literature today. No other contemporary writer is as comprehensively, and ambitiously, engaged with Europe’s histories of the avant-garde in addition to such vital participation in its present. Whether in poetry, essays, fiction, painting, scrawling, sculpting, film, performance, theatre, sound, or in happenings without definition, his art draws its volatile experience of language into the mobile and embodied possibility of language as experience. Emerging in feral exploration between the poetry of Tom Raworth and the prose of László Krasznahorkai, this is a shape-shifting and omnivorous body of writing; uncompromisingly alive, playful, violent, oblique and confrontational.

You can get a sudden attack of nausea by staying too long in an art gallery as well. It must be some kind of illness—museumitis—unknown to medical science. Or could it be the air of death surrounding all things man-made, whether beautiful or ugly?

A novella of ludic menace, SJ Fowler’s Mueum is a puzzle without pieces. Following the grand tradition of the Nestbeschmutzer authors (one who dirties their own nest, vis-à-vis Bernhard and Gombrowicz, et al), Mueum pictures the amassing and dismantling of a public edifice, brick by brick, in prose that refracts and breaks the light emitted by history’s ornaments and history’s omissions.

Suspended in unknowable time there is a city; in the city, an event, a conflict. Amid the ash, fog and cloud, there is the manufacturing of a space—a many-winged museum on the make. On the plinths, exquisite remnants of life present and past—adorning the walls, portraits of gentle torture sit hand in hand with brutal and statuesque portrayals of camaraderie—and the gift-shop is littered with plastic curios and gilt revulsion. Goya, as atmosphere rather than artwork, hovers amid iron age ghosts, bronzed ideas, and antiqued anxiety.

Pacing the hall, atrium and corridor, there are those who keep the museum—the various midwives to the building’s demands—and those, like the reader, who merely visit; those who pass through the vacant galleries adrift with questions. What can I touch? What is next to Egypt? What is hidden in Mesopotamia? Where do we eat? Drink? Where is the entrance? The exit? In Fowler’s curt, spiralling, and acute work, the museum’s keepers will answer.

Deeply, beautifully unsettling, and somehow so complete that I have screwed up and rewritten this endorsement seventeen times. As a text, MUEUM seems to eat any potential response to it. Sometimes I called it a mesmerising, bravura meditation on work, power, and subjugation; sometimes I called it the psychopathology of the institution; sometimes I just made sub-animal noises. Initially I just felt awe at how compelling Fowler can make the sheer tedium of labour, in an environment terrifyingly regimented, curious (and intimate, like being let backstage behind existence itself), but this was gradually replaced by an increasing suspense and horror which got its claws into me for the whole last half of the novella. Anyway. It makes me very happy—and also insanely jealous—that works like this are being written.

Down in the mire of London's grimpen, above the drained marshlands and drift of the fatbergs, exist the cultural centres that shine like jewels in the mudcake of the greatest city on earth: London's museums. Their great domes are craniums through which pass the crazy, unbidden thoughts of a culture always moving closer to madness.

With the apocalyptic vision of Ballard and the acerbic attitude of Céline, Mueum scatters human detritus over the shiny Perspex of our most dearly loved vitrines. Rimbaud's visits to the British Museum reading room come to mind: scratching himself down for lice as he flicked through the latest encyclopaedias. And Bataille, assembling curios so strange the Surrealists wouldn't touch them wearing gloves.

MUEUM is a novel of watchers and the watched, a testament to the fact that people are always more interesting—and far stranger—than things. And nothing is stranger than people's obsession with touching objects from the questionable past.

Prepare to travel the world, from Rome to Japan, with a travelling troupe of unforgettable characters who walk the world each day but never leave a building. SJ Fowler's MUEUM is an essential artefact for our troubled times, proving that travel of the mind is always more powerful than the real thing.

100 first editions will carry a cover sticker; SJ Fowler ‘on shift’ (at the British Museum), circa 2014, as photographed by Alexander Kell. Please be advised that adorned copies will ship within ten days of a placed order.

SJ Fowler is a writer, poet and artist living in London. His collections include Fights (Veer Books, 2011), The Rottweiler’s Guide to the Dog Owner (Eyewear Books, 2014), {Enthusiasm} (Test Centre, 2015), The Guide to Being Bear Aware (Shearsman Books, 2017), I will show you the life of the mind (on prescription drugs) (Dostoyevsky Wannabe, 2020) and Come and See the Songs of Strange Days: Poems on Films (Broken Sleep Books, 2021), amongst others. His work has become known for its exploration of the potential of poetry, alongside collaboration, curation, asemic writing, sound poetry, concrete poetry, and performance. Fowler has been commissioned by institutions such as the Tate Modern, The Photographer’s Gallery, Wellcome Collection and Southbank Centre, and he has presented his work at over fifty international festivals including Hay Xalapa, Mexico; Dhaka Lit Fest; Hay Arequipa, Peru; and the Niniti Festival, Iraq. He was nominated for the White Review Short Story Prize, 2014, and his short stories have appeared in anthologies such as Liberating the Canon (Dostoyevsky Wannabe, 2018).

From December 2007 to November 2014, Fowler was a gallery guard, or ‘visitor host,’ in the employ of the British Museum. This book is dedicated to his colleagues, living and dead.